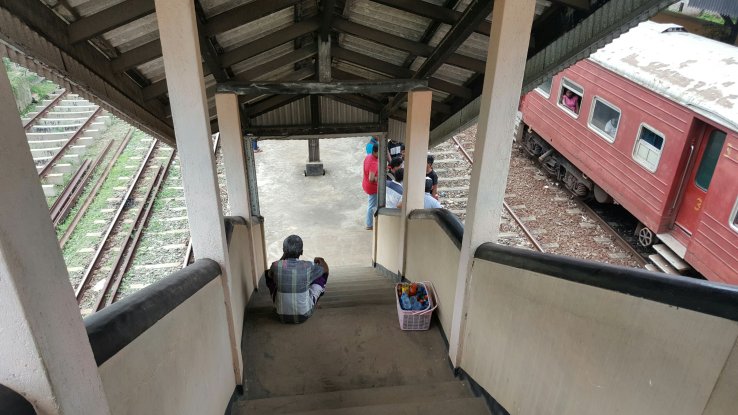 I met this entrepreneur at Ambalangoda railway station on the morning that dawned with a curfew imposed in Gintota for a clash that had potential to brew in to an ethnic tension. I asked him questions about his life and his work.

” I have been selling water and soft drinks in trains for 20 years now. Now Fort railway station officials have barred us from getting in to trains. Our seller union is in talks with the officials. We do not have the approval yet, so I am hopping to trains from Aluthgama to Hikkaduwa. I do not go to Galle, because I may get arrested. I had been arrested 5 times, for selling water.”

With a deep sigh, he continued.

“Now our people have started fighting among ourselves ( he was referring to Gintota clash) . Media would project as many other things they want. what happens ? Tourists will stop coming to our area. ”

I saw him selling his water in the train. One Sri Lankan customer purchased one bottle ( Rs. 50/-) and showed a Rs. 1000 note. I was furious just to look at it. But this entrepreneur went to the next customer and a one more and got it sorted out. Not a hint of irritation in his face or his actions.

These entrepreneurs are the fabric of our country who bears the burden of the embroidery of GDP and other economic numbers you see in many glossy reports.

These people have no safety nets. They hustle on a daily basis, with no excuses. The system is against them, yet they do not give up, they hold on. The struggle is real. They put food on the table. They are the real heroes. A country which does not have these people in their agenda is a nation of hypocrites. These people are not in our radar in the AC room discussions in Colombo. While we go on social media saying western forces are robbing us, just think, we are robbing these people of their future as if they do not exist.

1 thought on “A rant: Grit of street entrepreneurs.”